Our Living Languages: First Peoples’ Voices in BC

How many of us in BC can say “hello” in the language of the people on whose traditional territory we live, work and play?

You might find yourself expanding your vocabulary—and appreciation for the state of Indigenous languages spoken in BC—after visiting the White Rock Museum & Archives to view the Our Living Languages: First Peoples’ Voices in BC travelling exhibition. 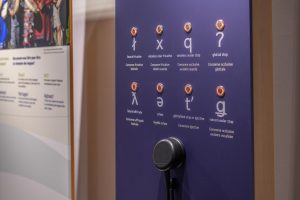 Learn what First Nations communities throughout the province are doing to help 34 different languages survive and flourish, in Our Living Languages, a beautifully designed exhibition from the Royal BC Museum and First Peoples’ Cultural Council that celebrates the resilience and diversity of Indigenous languages in the face of change.

Languages, especially the languages we grow up with, are powerful and potent markers of identity and culture. BC, one of the planet’s most linguistically diverse regions, is known as a linguistic “hotspot” because of the diversity and vitality of the First Nations languages in BC.

This exhibit is complemented by select pieces from the White Rock Museum & Archives which represent various Indigenous communities throughout BC.

The exhibition runs from January 21, 2020 until further notice at the White Rock Museum & Archives.