The History of White Rock 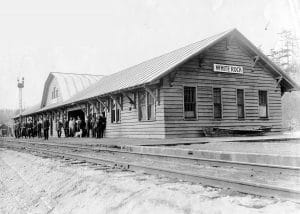 The text below is excerpted from Lorraine Ellenwood’s book, Years of Promise 1858-1958.

At the turn of the 20th century, White Rock was Surrey’s child prodigy. The tiny seaside settlement at the southwest corner of a sprawling young municipality was hardly big enough for urban ambitions, but the promise of its beaches and balmy climate was obvious.

Homesteaders reached Surrey’s seafront area near the international boundary as early as 1890, but settlement was slow until the Great Northern Railway line was rerouted to follow the Semiahmoo Bay shoreline in 1909.

And the attributes of this paradise had not gone unnoticed; the days where the white rock was simply a landmark, signifying home to a handful of people trying to eke out a living from the sea or the forest, were fast ending.

It was Canada Customs policy to have ports of entry at least one mile from the border. It was therefore Canada Customs who determined the exact location of the future community when they located their office at White Rock. The tiny railway station and customs office became the centre of gravity for a new community.

Speculators anticipated the influx that would come with convenient railway access. Among them was Henry Thrift, a bustling Hazelmere farmer who had a finger in most Surrey pies. In 1910, Thrift built his home, Bella Vista, on the White Rock hillside facing the sea and subdivided his surrounding holdings. Buildings soon lined the rails along the beachfront, as close to the train depot as possible. Summer cottages dotted the hillside.

In 1910, the original White Rock town site, where streets are at a different angle, defying the lower mainland grid system, was marketed by a New Westminster real estate firm. Other well known names, among them Harry Vidal and David Hughes, joined the fray and real estate boomed. By 1912, with three newspapers and bread delivered daily, White Rock hardly suffered pioneer conditions.

To read the full story, download The History of White Rock.

The Legend of P’Quals (the White Rock)

Shared with permission of the Semiahmoo First Nation 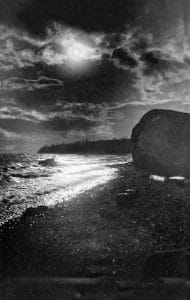 Long before European settlers and explorers visited the Salish Sea, people lived here during a time when things were very different. During this time, people were attuned with nature and possessed many spiritual powers.

The Salish Sea was protected by a sea-being and his son. The sea provided an abundance of food to the tribes who lived along its shores. The Cowichan people and their chief were one of those tribes.

One day, the chief’s daughter was bathing in the sea. The son of the sea-being rose to the surface and fell in love with her at first sight. The pair hoped to receive the blessing of their parents, but the new couple was denied marriage by their parents.

To read the full story, download The Legend of P’Quals.