Then & Then and Now 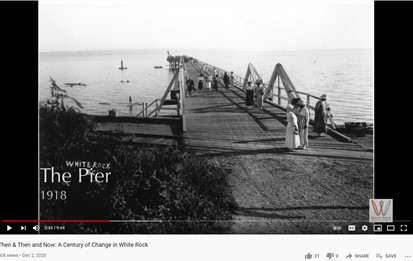 The White Rock Museum & Archives is proud to present our new video, Then & Then and Now: A Century of Change in White Rock.

This video features photographs by Walter Calder, Russell Porter and Hugh Ellenwood taken from similar vantage points of locations all around White Rock, B.C. in the years: 1918, 1986, and 2011.

Specific locations in White Rock include:

We hope that you enjoy this photographic journey which documents the changes that have occurred in our favorite seaside community over this past century. Explore the city, see if you can find the locations shown, and try to recreate your own photos of these iconic places.

“We wanted to change things up from the quiz format for this one, and ‘then and now’ is a format that everybody loves. But in this case, we have three different eras of photographs, so that makes it that much more powerful.” – Hugh Ellenwood

White Rock Museum & Archives is grateful for the technical and production assistance of Mark Roland Henning from Boutique Empire Studios. Many thanks to the City of White Rock’s Arts & Culture grants for their funding assistance.

More videos are in development for the future, as well as a video adaptation of Hugh Ellenwood’s popular historical walking tours, so subscribe to the White Rock Museum & Archives YouTube page to receive notifications.