Castles In Your Mind 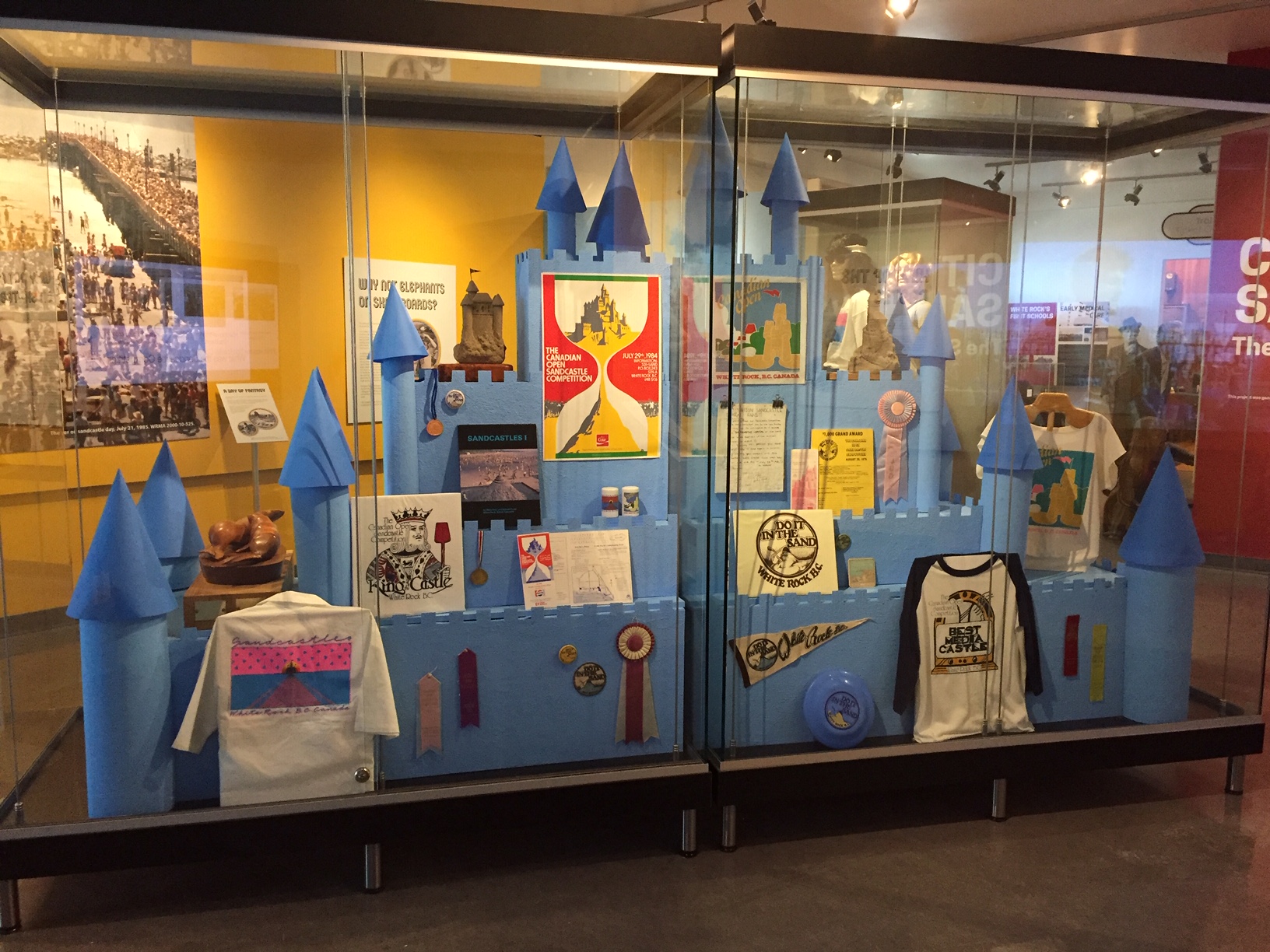 Envision walking elbow to elbow in a sea of people in bare feet and summer attire.

Visualize feeling the sand on your feet and the sun on your skin, smelling the soft scent of the beach. Imagine hearing the hum of a massive crowd punctuated by loud cries of glee. Or the drone of a low flying aircraft, or the melody of a wandering minstrel. Imagine watching children and adults of all ages, shovelling sand, moulding sand into whimsical creations, and laughing at their mistakes.

Throughout the 1980s, crowds of upwards of 100,000 people gathered annually at Semiahmoo Bay to attend the Canadian Open Sandcastle Competition (1979-1985 and 1987). Competing teams had four hours during low tide to create the best sand sculptures on the beach. The event was free for spectators, encouraged family attendance, and was open to all. As it grew in popularity, the festival became a lo 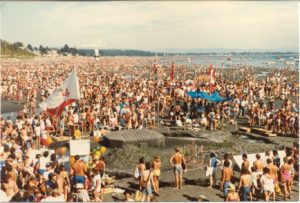 In many ways, the event mirrors the ephemeral nature of a sandcastle: a  creative and exciting beginning, lots of hard work and lighthearted fun, and then a rapid dissolution by the lapping and inevitable tide. Today, the sandcastle competition lives on only in the minds of those who experienced it, or those who continue tapping its creativity and see the castles in their own minds.

The exhibit, on view from June 7 – October 7, 2019 explores the life span of this imaginative event
and invokes the fantastical! 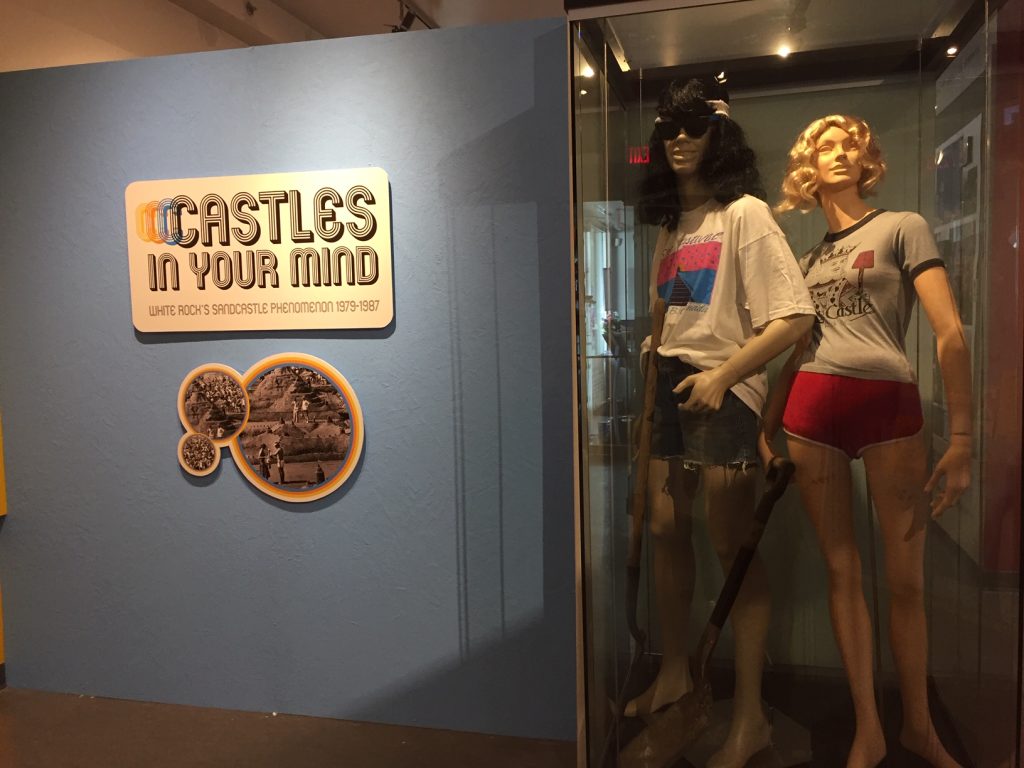 The sandcastle competition was born of discontentment.

Tom Kirstein, Chip Barrett, and other friends had been disappointed with the July 1979 annual Sea Festival. Poor weather and a feeling of waning enthusiasm and support left them wanting to do something. Something big.

At Sawbucks Pub a week later, Tom, Chip, and friends gathered. They brainstormed about a beach event that would reinvigorate the waterfront and draw a large crowd. Their ideas ranged from go-kart races down Oxford Street, horse racing on the beach, and elephants on skateboards. They also considered expanding the existing sandcastle competition that had been a part of the Sea Festival for many years. They imagined huge sandcastles more than 1600-square feet.

Energized by the sandcastle conversation, Tom and Chip made calls to colleagues to see if they could raise some prize money for the competition. In a few hours, Tom and Chip had raised $4000 in prizes.

The Canadian Open Sandcastle Competition was born, and scheduled for August 26, 1979.

White Rock locals Tom Kirstein and Chip Barrett planned and implemented the sandcastle competition eight times in White Rock with the help of thousands of volunteers. 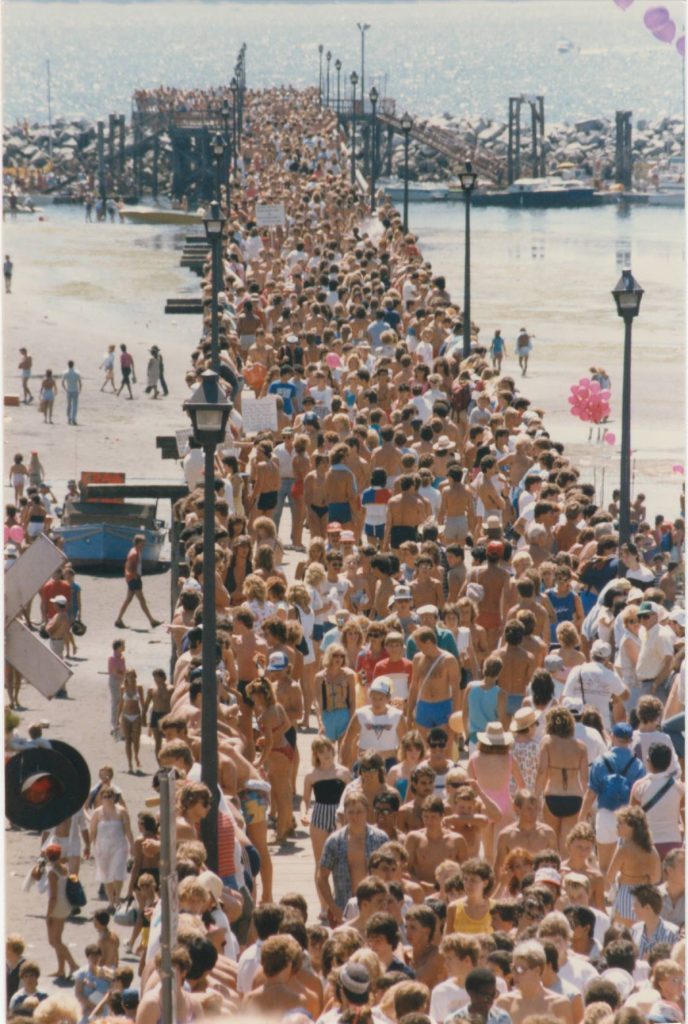 Over its life span, the competition likely drew more than 850,000 visitors to the beach and Marine Drive. Teams consisted of up to 10 people, using a marked area up to 40 feet by 40 feet. The start time depended upon the tides. Teams were allotted 4 hours to complete their creation. There were strict rules about equipment and other aids.

Registration cost was very low ($10 – $40), but there were substantial cash prizes for winners in each category, including a $5000 grand prize (at its peak), and a free trip to Disneyland for each winning team member (10 trips total). There were different categories to enter, and they changed over time: Castles of Your Mind (most fantastical), King of the Castle (tallest), Best Sculpture (in likeness to the subject), Most Authentic, Best Family Castle, and more. 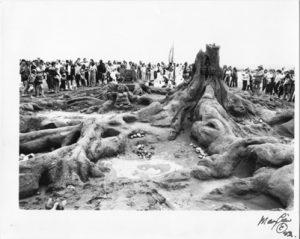 As notoriety of the event grew, businesses began sponsoring teams. They asked that teams to integrate their logos into the sand creation, or to wear t-shirts with company logos. Sponsoring businesses paid for competition and travel expenses and in some cases sponsored the after parties too.

In 1986, the sandcastle competition was cancelled.

The night before the competition in 1985, thousands of people were having a party on the beach. The large crowd made the situation tenuous, and a few people sustained minor injuries. There were reports of vandalism and unauthorized camping on the beach and Marine Drive.

In early 1986, the Government of BC changed its liquor laws for Expo ’86. The
new laws allowed liquor to be sold on Sundays. This was the same day of the week that the Canadian Open Sandcastle Competition took place. It meant that sandcastlers could buy alcohol on Marine Drive. This new legislation, coupled with the incident from the previous year, pushed Tom, Chip, and the City of
White Rock to cancel the event.

Many were heartbroken, others were glad.

Here at the Museum, we were curious to hear about the legacy of the Canadian Open Sandcastle Competition from community members today.

If you’d like to hear more about the event from community members today, please subscribe to our YouTube Channel for a new weekly video. We have a new, one-minute interview clips from co-organizers Tom and Chip, Chief Harley Chappell of Semiahmoo First Nation, Marg Cuthbert from Friends of Semiahmoo Bay, and board members of the White Rock Events Society who are planning for a new iteration in the future. 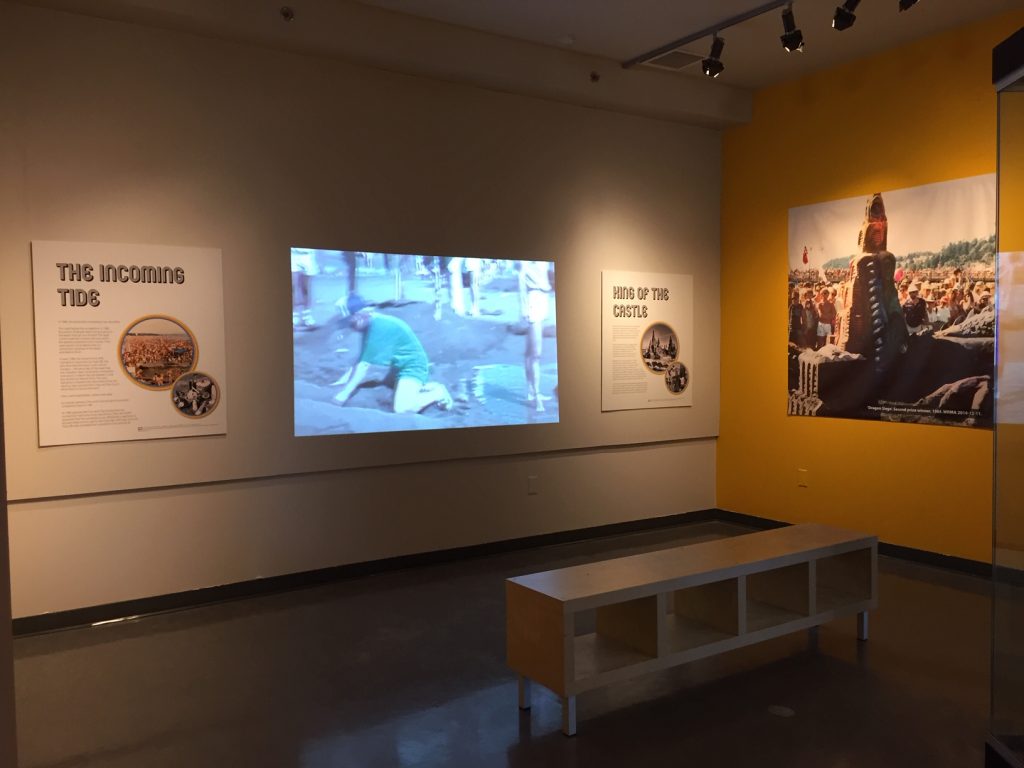