Our Living Languages: First People’s Voices in BC 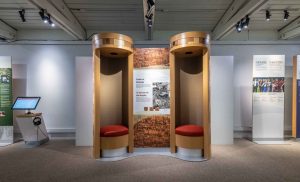 In 2019, to commemorate the UN’s International Year of Indigenous Languages, the Royal BC Museum in partnership with the First Peoples’ Cultural Council produced three custom-built travelling versions of its permanent exhibition Our Living Languages: First Peoples’ Voices in BC.

The Our Living Languages travelling exhibition highlights what First Nations communities throughout the province are doing to help 34 different languages survive and flourish.

This project has been made possible in part by the Government of Canada.  Ce projet a été rendu possible en partie grace au gouvernement du Canada.